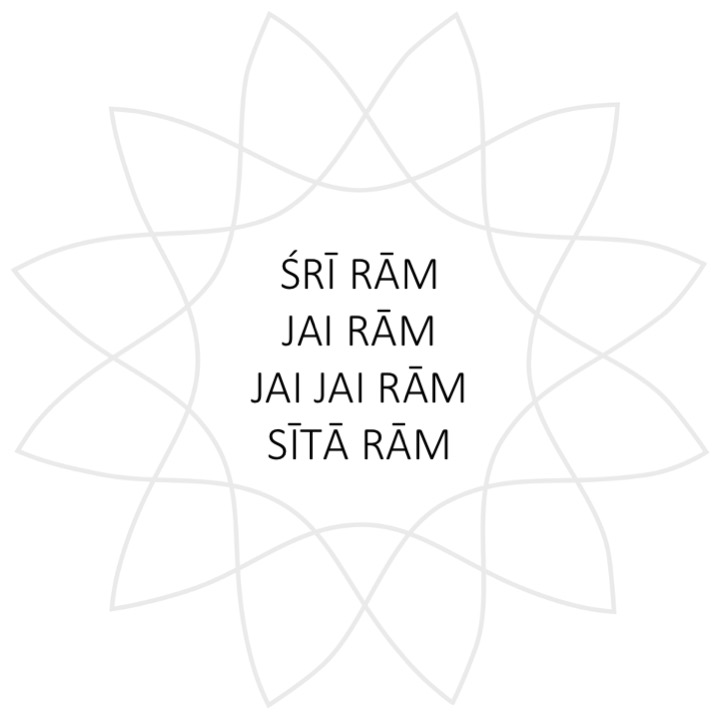 śrī: magnificent, splendid
rāma: seventh incarnation of Viṣṇu, preserver and protector of the universe
jai: victory to, celebration of
sītā: incarnation of Lakṣmī, goddess of abundance and prosperity

The divine couple Sītā and Rāma represent the perfect masculine and feminine united. He is known for his compassion and courage, she is known for her devotion and purity. Their story is told in the Rāmāyaṇa and has many ups and downs like a good old soap opera. Around the time when Rāma is being prepared to take over his father’s rule of the kingdom Ayodhyā, his stepmother Kaikeyī demands her son Bharata be crowned king instead and Rāma and Sītā go into exile. After having spent a long number of years in the forest, Sītā is abducted by the demon Rāvana and imprisoned on the island (Sri) Lanka. In the end, with the help of the monkey king Hanūmān, Rāma’s army can defeat Rāvana and free Sītā.

This is the first mantra for which I ever wrote my own melody. I had been practicing yoga in silence for about a decade until I discovered mantra and fell in love with chanting. My first mentor on the path to lead kirtan myself was Grammy-nominated record producer and kirtan wallah Dave Stringer. I met him at a kirtan he offered in Belgium in 2008 and attended his “Kirtan Flight School” in the Netherlands the year after. At the end of the workshop, every freshly formed mantra band was invited to present a chant. Shortly before we, “The Holy Cows” (yes, indeed), were up, we realized that we were supposed to offer not one but two chants and we had only prepared one of Dave’s. I asked him what to do. He encouraged me to make up something on the spot. He asked me which mantra spoke to me. I answered “Śrī Rām Jai Rām”. Then he asked me which chords I could easily play on my guitar. I played C, D and G and hummed “Śrī Rām Jai Rām Jai Jai Rām”. That night, “The Holy Cows” brought the house down.