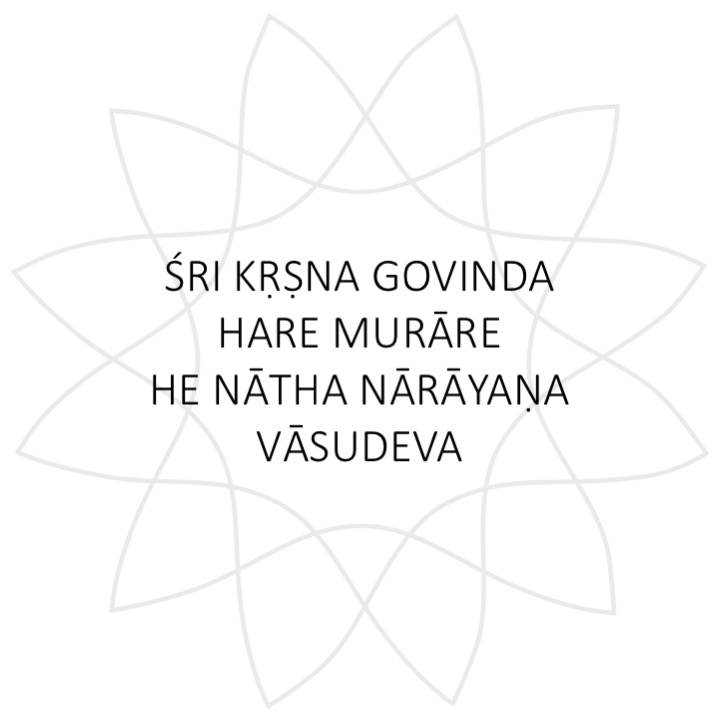 Magnificent Kṛṣṇa, protector of the cattle, remover of the sorrows of the world, slayer of the demon Mura
Oh lord, resting place for all beings, god who dwells within all

śri: magnificent, splendid
kṛṣṇa: eighth incarnation of Viṣṇu, the preserver of the universe, literally “the dark one” and “the all-attractive one”, son of Vasudeva and Devakī
govinda: another name of Kṛṣṇa, literally “cowherd”
hare: vocative form of “hari”, meaning “the remover”, referring to Viṣṇu as the remover of sorrows of the world
murāri: name of Kṛṣṇa as “enemy (ari) of the demon Mura”
he: vocative particle, meaning “oh!”
nātha: lord, protector, master
nārāyaṇa: another name of Viṣṇu, literally “resting place for all beings” or “he who moves the water (the ocean of consciousness)”
vāsudeva: son of Vasudeva (husband of Devakī, mother of Kṛṣṇa), literally “god (deva) dwelling in all beings (vāsu)”

Kṛṣṇa follows Rāma as an avatar of Viṣṇu. He is the son of the modest cowherd Vasudeva and his wife Devakī, and is mostly known for his playfulness and his generous heart.
As many other deities, Kṛṣṇa is known by many names, among which Govinda, meaning he who protects the cattle. He earned this particular name by lifting a mountain and protecting local villagers against the wrath of lord Indra. The people of Ambāḍi (Gokula) used to worship the rain-god Indra. Kṛṣṇa opposed this custom saying that Mount Govardhana was more important for rain-fall and should be worshipped instead. Indra got enraged at this and sent heavy rains to Ambāḍī intending to submerge it in water. Kṛṣṇa up-rooted and held Mount Govardhana over Ambāḍi like an umbrella so the cowherds and cows could take shelter under it and didn’t suffer any hardship.
Mura was a ferocious asura (demon), who at one point was challenged by the sage Vasiṣṭha
to fight the god of death, Yama. Upon hearing the news that Mura was coming for him, Yama pleaded with Mahāviṣṇu to save him. Confronted with Mura, Yama convinced Mura that if he would defeat Viṣṇu, he would be under his control from that moment onwards. It was at this time that Viṣṇu, incarnated as Śrī Kṛṣṇa, had been summoned by Indra to battle the demon king Naraka, who had been causing devastation and terror. When Mura came to the help of Narakāsura, both were killed at the hand of Kṛṣṇa and his spinning, disk-like weapon Sudarśana Cakra.
Arjuna and Śrī Kṛṣṇa are often referred to as Naranārāyaṇas, Nara and Nārāyaṇa. In their previous life they were two Ṛṣis (sages), in epic poetry they are the sons of Dharma. Both are emanations of Viṣṇu. Nārāyaṇa is the name of Vishnu as he sleeps a dreamless sleep in the water (having water, nara, as his abode, āyaṇa), resting on the cosmic serpent Ananta (or Ādiśeṣa), until he wakes up and a lotus emerges from his navel from which Brahmā, the creator, is born.

I wrote the melody fort his chant sitting at the piano, simply playing a few keys to the words of the mantra that were scribbled on a piece of paper in front of me. It was one of those extraordinary moments of inexplicable inspiration, where a melody seems to come to me just like that and I am left speechless after the fact. I didn’t change a note after I wrote it down and I still wonder sometimes where it came from.
There is something unusual about Kṛṣṇa energy that I cannot quite put my finger on, but I don’t think it’s a coincidence that so many people have been inspired by Kṛṣṇa, that an entire movement of devotees spread all around the world in the form of the International Society for Krishna Consciousness (ISKCON), colloquially known as the Hare Krishna movement.