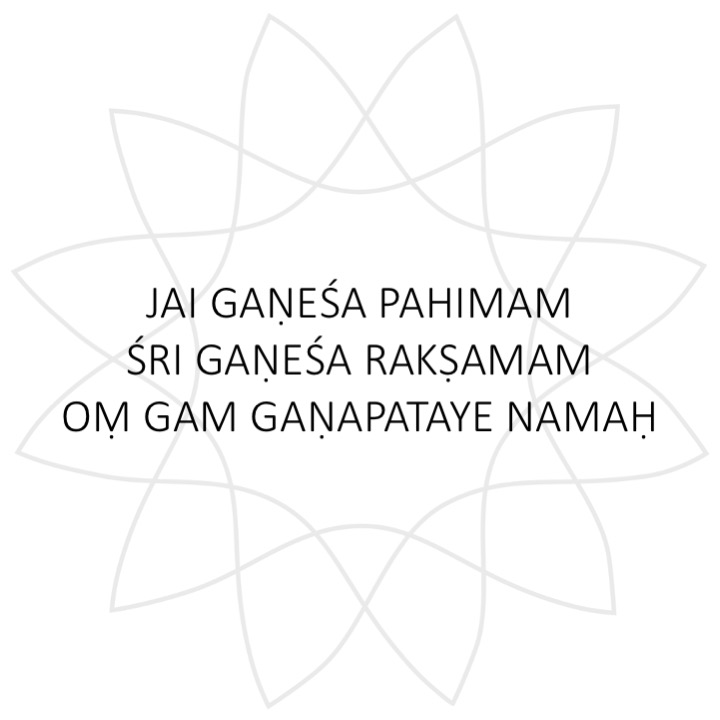 Victory to Ganesha, savior and protector, lord of the troops, remover of all obstacles. I bow to your name.

With this mantra, we seek refuge with Gaṇeśa who is mostly known as the remover of obstacles. He is also known as Vighnēṣvara or Vighnarāja, which both literally mean “lord of obstacles”. What is sometimes overlooked, is that he not only removes obstacles but also places them. Therefore, when he is invoked, instead of asking him to solve our problems, we rather ask for his guidance to help us see what we may percieve as problems from a different perspective.
Gaṇeśa-s depiction echoes this openness of mind: he has large ears for listening, a big head for thinking, small eyes for concentrating, a small mouth to talk less, a potbelly to be able to digest all things in life, a trunk to discriminate, and only one tusk which is interpreted as letting go of what no longer serves.
Singing Gaṇeśa’s (or any other deity’s) name is called nāmarūpa which means “name and/is form”. In the mantra tradition, the name of something embodies the essence of its form. By saying someone’s name, we call forth their energy within ourselves. This is why in so many mantras, when we chant “namo namaḥ” this is often freely translated as “I bow to your name”.
This intention is furthermore strengthened by the final part of this mantra. Every deity has a seed sound or bīja mantra, which is said to contain their core vibration or essential energy. As with nāmarūpa, chanting a bīja in itself already evokes the deity’s energy. Combining Gaṇeśa’s seed sound “gam” with his name and preceding it with the sacred primordial sound “oṃ” in “Oṃ Gam Gaṇapataye Namaḥ”, which could be called Gaṇeśa-s root (mūla) mantra, makes it all the more powerful.

When I first presented the mantras I wanted to record for the HOME album to my producer, Spring Groove, she wasn’t a fan of my interpretation of “Jai Gaṇeśa” initially. I hadn’t expected her reluctance to include it because I loved it so much. I really had to convince her to keep it in the running for the final track list. I still remember her saying “I think it’s a little ‘circus-y’”  :-). I didn’t take that as criticism, rather an accurate description of the note loops I play on the harmonium for the first part of this mantra. All I thought (and said) was: “I can’t be playing just chords all the time! This makes it a bit more fun and upbeat”. And as it turned out, the perfect opening track for the album.

Watch the video on IGTV here.