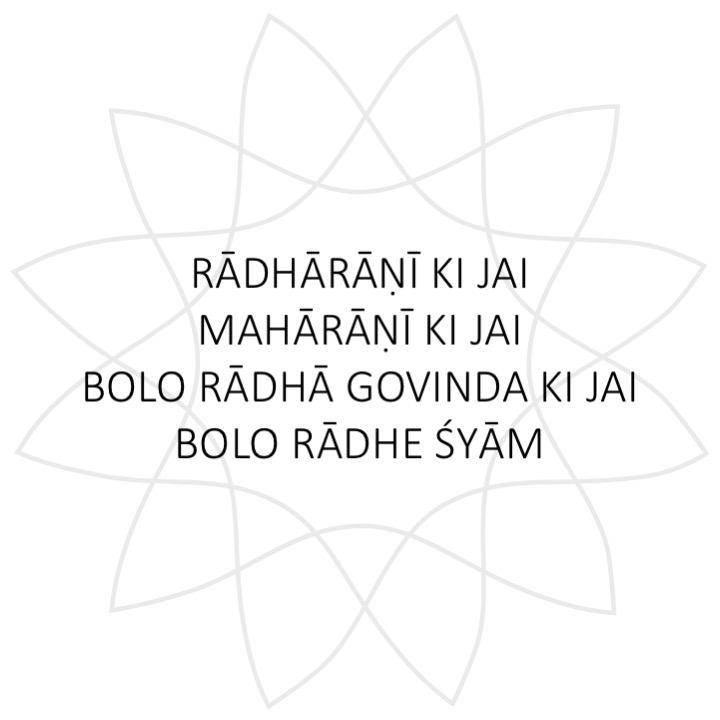 Posted at 17:05h in Blog, Mantra, Music by info@yogiluc.com

rādhā: the milkmaid (Gopī) dearest to Kṛṣṇa, considered an incarnation of the goddess Lakṣmī, literally “prosperity” or “success”
rāṇī: queen
ki (Hindi): a Hindi grammatical construction, meaning “of”, “to” or “for” (as in “Victory to Rādhā”)
jai: victory to, celebration of
mahā: great, mighty, strong, abundant
bolo (Hindi): say, sing, proclaim
govinda: another name of Kṛṣṇa, literally “chief herdsman”
rādhe: vocative form of rādhā (as in “Oh Rādhā”)
śyāma: another name of Kṛṣṇa, literally “having a dark complexion”

Rādhā was born in Gokula as the daughter of Vṛṣabhānu and Kalāvatī. An alternative story about her birth is that she was born from the Rasa Līlā, the dance of divine love in which Kṛṣṇa dances with the cowgirls. In this dance, Rādhā ran in front of Kṛṣṇa and he fell in love with her at first sight. Dhāvana being one of the Sanskrit words for running, in this case the name Rādhā is interpreted to be a compound of Rasa and Dhāvana. She is sometimes endearingly referred to as Rādhikā, meaning “little Rādhā”.
Rādhā is the personification of loving devotion (bhakti). As goddess of romantic longing, she wishes to merge with her beloved, radically devoted to the divine. However, Kṛṣṇa’s love for Rādhā is not exclusive and they barely spend any actual time with each other. Their love story of sweet separation of lover and beloved is a metaphor for the human-divine relationship. Rādhā is the human soul who finds liberation once she begins to see Kṛṣṇa everywhere and the whole world becomes her beloved.

When I had written most of the material for my second album, I was looking for someone to work with who would help me take this project to the next level. At the same time, I knew that this could only happen if I was willing to step outside of my comfort zone. The role of the producer the way I see it, is walking the thin line between serving the original vision of the artist, and showing some “tough love” that may initially trigger resistance but will in the end contribute to the quality of the final product.
I don’t know many other people who could have taken on this responsibility as gracefully as Spring Groove has done for me on more than one occasion. Working with Spring, first on HOME, then on LOVE, and finally on GANESHA, has been an honour and a pleasure, whether it be in pre-production, recording in the studio, or in the final stages of any of these projects.
From the beginning, “Rādhārāṇī Ki Jai” felt like a duet that would pay tribute to Spring’s talent and support. I only played it live once or twice, when Spring was in town and we could play it together.